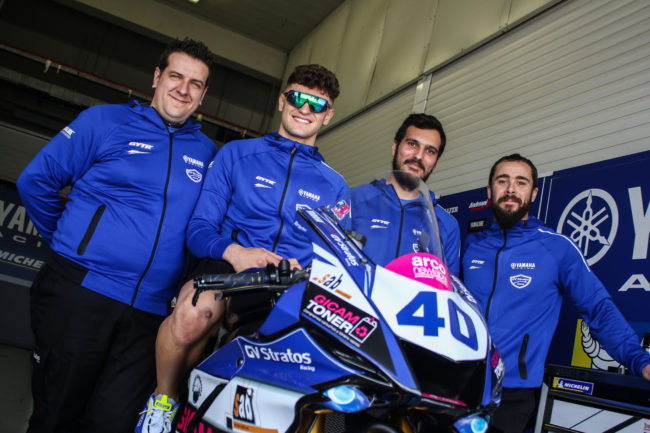 The Madrid Rider, current champion of the Yamaha R6 Cup, joins the Yamaha GV Stratos team for the new 2022 season of the Spanish Superbike Championship in the Superstock 600 category to fight for the championship.

Aarón is part of the team since last season in which he competed both in the Yamaha R6 Cup, in which he was proclaimed champion and in the CIV, coming in third position. He also participated as a wild card in the ESBK last season with the team at the Jerez Circuit in the 600 class, with very good sensations.

He is a young rider who stands out for his sporting progression and his ability to adapt and learn on the track, skills that will be very useful for him to adapt to the championship and to this category.

The Yamaha R6 is a bike that he knows perfectly, and which also suits his height and riding style. This weekend he is already on pre-season testing in Jerez with the team to work on the bike and finalise the last details for the first race of the calendar, on April 2nd at the same track.

Rafael Carlos García, Team Manager: «We are really very happy to have Aarón in the ESBK for this season, we have already worked with him both in the CIV and in the R6 Cup, in which he won the title, I think we can expect a lot from him, as he has shown that he can fight to be at the front in his category.

This year we have a strong support from sponsors which is always very important to be able to fight with all the weapons for the championship, in a season in which he will share the pit box with Kimi Patova, a perfect partner for him and they will bring a lot to each other.

We are sure to have some great races together.