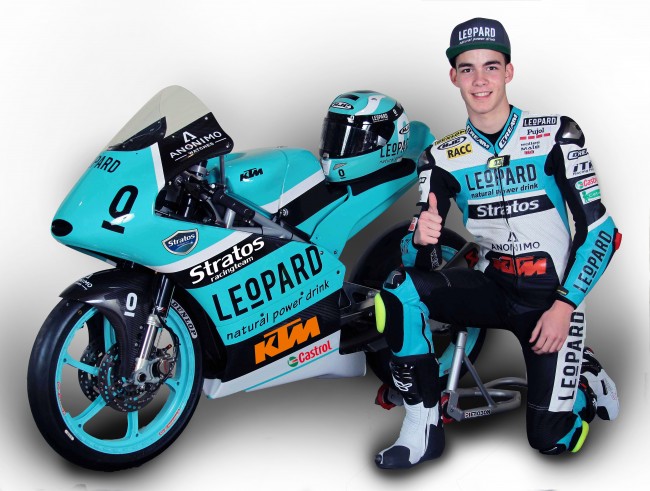 The current champion of Spain Moto3 take off to the FIMCEV from the structure of Leopard Junior Stratos.

This weekend has been presented in Gallano, Italy, the Leopard Racing Team at World Championship in Moto2 and Moto3, accompanied by Gerard Riu, the new FIMCEV rider with the structure in Moto3. The young Spaniard faces a new season after winning the Spanish Champion in Moto3 last year, getting 6 podiums and 3 wins. Undoubtedly, the jump to the World Junior championship will become easier, thanks to the support of KTM and Leopard Junior Stratos presenting Moto3 structure in order to fight for the title and be one of the reference teams in the championship.

Gerard Riu, with 16 years old, has extensive experience despite his age, with over 9 seasons on a motorcycle is destined to be one of the emerging talents of the World Junior Moto3 Championship and in hand with KTM and the team they will fight for excellent results in every race with the colors of Leopard Energy Drink.

The calendar of Repsol Moto3 in FIMCEV this season will consist of 8 events and 12 races, among which Le Mans (France) with the World Championship. The Leopard Junior Stratos has already started the preseason and it will make his debut on April 17 at the Valencia Circuit.

Gerard Riu #67 “I am very happy with this opportunity with the Leopard Junior Stratos Team and eager to begin the season and take advantage of every practice and race. The main goal we have is to learn a lot and adapt to the bike from the first races to try to be ahead and ride fast . We’ve done some tests and we are following the correct path to start the season stronger. I want to thank the team, Leopard and KTM for thinking on me this year and my family and all the people who support me another year, I hope to give them good moments.”

Ricard Jové Team Manager @ricardjove  «I’m really proud to be able to publish this new Moto3 project for the 2016 season FIM CEV. With the support of a great sponsor like Leopard and the experience of a technical as Christian Lundberg , Team Stratos grows to return to the Moto3 category which I personally passionate about. Our vocation in training is still alive and we will put all our sport experience in this talented rider, Gerard Riu, to provide him with the necessary human and technical resources to fight for the title. I want to thank all who have contributed with their work to start this new project in Moto3 with Leopard Junior Stratos.»