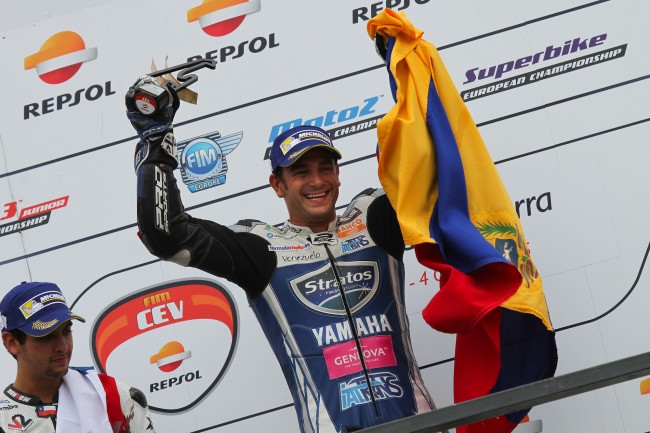 The Venezuelan Stratos R1M rider has made two extraordinary races, winning the first race with 40 seconds ahead and being third in the second one. Robertino Pietri goes out Navarra FIM CEV second in the provisional standings. Niko Mäkinen has finished 13th and 11th respectively.

Although rain was predicted for Sunday, it said that these forecasts may appear in the final part of the race day. However it has appeared before, during the night and then in the warm up lap Superbike race. This fact has led to shew Race Direction red flag and the process from restarting. Team Stratos and Robertino Pietri decided dry tires for the first race, taking the risk that the rain had stopped, started again. When the red light was off, Pietri, who started fourth, began to lead the race, taking risks and seeking to impose their pace to pull away with his rivals. Lap after lap, relentlessly, Robertino has taken R1M Yamaha to victory with a lead of 40 seconds over the second classified, also making his first victory in the Superbike class. And finally in the second race, Robertino has been struggling to climb back to the top of the podium, but had to settle for a third place that hitch him up to the second position of the standings.

The Finn Niko Mäkinen has returned to make two great races, finishing in thirteenth position in the first and eleventh in the second. Precisely in the first, Mäkinen has opted for wet tires. In the afternoon race the Finn again shown its best side to stay at the door of the «top 10». Makinen is being one of the riders with most progression of the season, and he is improving every race. On his second year in the European Superbike Championship has managed to lower his best times in each track of FIM CEV, taking the Stratos Yamaha R1 to the points in all races.

After this exciting weekend, Team Stratos put his sights on the Jerez circuit, which will host the next round of the FIM CEV Repsol October 30 and November 1.

Robertino Pietri @robertinopietri -SBK-  R1: 1º / R2: 3º: «It was a crazy race, on the starting grid, I saw nearly all riders had rain tires, but my team helped me keep calm and gave me a lot of confidence, so I knew that I had a chance to win. It was difficult, because to ride alone for so many laps, with damp tarmac and some drops of rain at some points, I needed to be completely focused to avoid any mistakes.

«I knew that I could be two or three seconds faster than my rivals, so the aim was to finish the race. I want to thank my team, my sponsors, and my family, because I’ve been through a long path to get this victory. Also to Yamaha Europe, this R1M it´s really amazing!!»

Niko Mäkinen -SBK- @ -SBK- R1: 13º / R2: 11º: “We have ridden about as fast as yesterday, but we couldn´t be faster as other riders because of the tire choise. I went out with wet tire and I could not do anything else.

I’m happy with the results, but it could have been better. At least we are always now getting points and improving in each track. This last two races i want to fight for top 10 and take good results again. Congratulations to my team mate Robertino for the great races today and the victory and thanks to all my sponsors, Team Stratos and family, friends and fans, it´s really good feel the support i have!»

Ricard Jové Team Manager: «Today was a great day, hard, because there have been four races, two of each category is long and the work that mechanics have done and the whole team has been tremendous. In addition we will celebrate in a big way because a victory and a podium in Superbike with Robertino it´s the least we could get with the great job they have done and all of the strategy we have done in the first race. We have played with the choice of riding the slick tires, it was a good decision and I think there is nothing else to celebrate.

I´d want to congratulate Robertino and the whole team for the work they have done, because there has been nerves but have managed to carry. We must thus continue to see if between now and end of year we can fight for finnish second, why not get more podiums and although it seems difficult to fight for the championship, at least confirm that second place.»