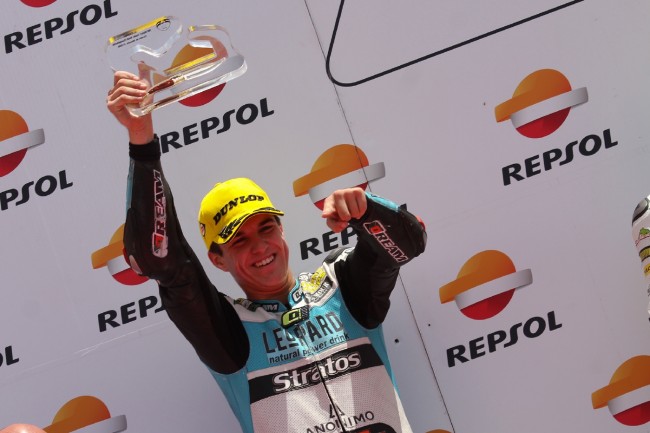 Ramirez and Leopard Junior Stratos back on podium in Albacete

The rider from Cadiz finishes in second after fighting for victory the whole race. Gerard Riu ends up close to top ten.
After the struggle in Montmeló three weeks ago, Marcos Ramirez and the whole Leopard Stratos Junior Team arrived in Albacete in search of improvement and results. Yesterday, during timed practice, Ramírez showed great shape and he has proved this today claiming the second spot after fighting for the victory during the whole race. He only fell 88 thousands of a second short to the win, although his second place today keeps him in second overall in the standings in the Moto3 Junior World Championship.

Gerard Riu showed good performance during the race, staying consistently among the top ten spots and fighting against World Championship skilled riders. The Catalan rider has struggled with the knee injury he sustained three weeks ago in Montmeló and had to give in the last laps to finally claim 11th place.

After today’s race, there are still three more rounds to go of the FIM CEV, with five races ahead. The next one will take place the last weekend of August in the Autódromo de Portimao, in Portugal.

“We arrived here after losing a lot of points to Dalla Porta after my crash in Montmeló. Luckily nothing serious happened there so we arrived here in Albacete in good shape thanks to the support from my team and my family. I started third, knowing that I could fight for the win. I’ve been right there with Dalla Porta and the leading group all race long. I knew my race pace was better so I decided to get in the lead and try to open a gap to break the group. We have been both fighting for the win, but this heat I was losing my front end, so I just did my best to finish second. I want to say thank you to the team, to my family, to my sponsors and to all my supporters.”

It was a funny race at the beginning, but I was too tired at the end. I’ve made a decent start and managed to overtake some riders to find a front spot, but after six or seven laps I’ve struggled with my knee and with my fitness, so I finally settled for 11th. I’m pretty happy and I want to thank my team for the hard work they have done.”

“We are very happy because the main thing is to stay in the fight at all times. We did not win, but we’ve been very close so I have to congratulate Marcos for his efforts, as it really has been a tough weekend. We struggled to find the right bike set up to keep close to the fast lap times, but we finally made it, so we still keep defending the second overall place with still five races to go.

We are also happy for Gerard, as he has been inside the top ten spots until his physical problems just allowed him to end up in 11th. It is also important to note that none of both riders has had any crash since we started practices on Thursday, which is really remarkable considering the tough weather conditions we’ve experienced these days. So I can just congratulate both riders and the whole team for an excellent job.»