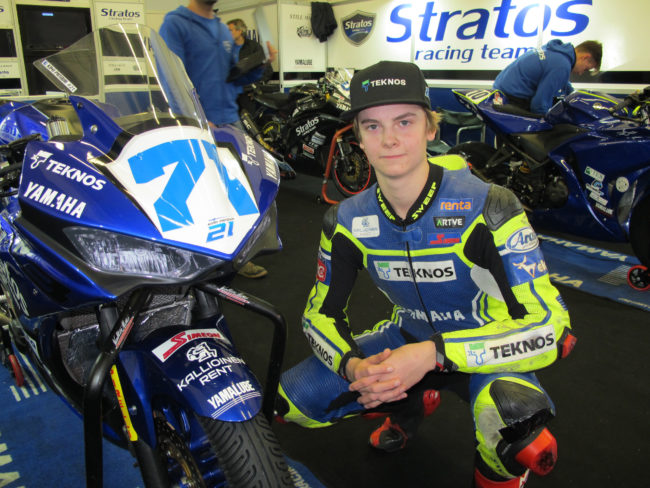 The Yamaha Stratos Team arrives at the Angel Nieto Jerez Circuit this weekend to contest the sixth and final race of the Spanish Cetelem Roadracing Championship. The Madrid team wants to finish the year in the podium with the most international group of riders in the paddock.

After a month since the last test held in Valencia, the Yamaha Stratos Team completely lands on the Cadiz track with options to take two titles. Niko Mäkinen in Open1000 and Unai Orradre in the Yamaha R3 bLU cRU Challenge are the candidates for it.

For Niko Mäkinen, this test will be a tough challenge. The Finnish rider is now fourth in the general classification, but with only 10 points of disadvantage. For that reason, Mäkinen has realistic options to revalidate the title he already won last year. At his side will be David
McFadden, who already brushed the Top10 in SuperStock1000 at Valencia and in Jerez will try to get into the top ten next to his Yamaha R1 with Dunlop tires.
In Supersport 300, Unai Orradre also has options to proclaim himself champion of the first edition of the Yamaha R3 bLU cRU Challenge. Orradre was able to maintain the lead after the difficult weekend in Valencia and he arrives to Jerez as a favorite to take the crown. Although his rivals will not make it easy, he has 13 points of advantage in the classification, so he part as a favorite. In addition, Unai can also get to finish the year as the best Yamaha rider.

For this last race, Orradre will not be the only driver the Yamaha Stratos Team lines up in SuperSport300. Kimi Patova, a 21‐year‐old Finn, will debut in the RFMECEV. Patova knows that he arrives at a very demanding championship, but he has the conviction that he can sign a good role in the Jerez Circuit, where he already raced last year with Kallio Racing Team and the Yamaha R3 in the World Supersport 300 championship. Kimi will also participates in the Yamaha R3 bLUcRU Challenge, having options to get a Yamaha pódium in the las trace of the championship.

On this occasion also participates again the Finnish pilot Vertti Takala, who already ridden in the race held at the Ricardo Tormo Circuit in the SuperStock600 category. Thanks to the experience accumulated in his debut and all the information collected, both the team and Takala himself have as their goal to complete a good weekend in the Cadiz circuit.

On Saturday will be disputed the qualifying practice that will form the starting grid. Also on Saturday the first race of the SuperStock600 and SuperStock / Open1000 categories will take place at 5:00 p.m. and 6:00 p.m. respectively, both scheduled to 16 laps. On Sunday, the
SuperSport300 race will begin at 11:00 with a scheduled 12 laps. The second race of SuperStock600 will start at 12:00 and the second race of SuperStock / Open1000 at 13:00, both being scheduled for 16 laps.